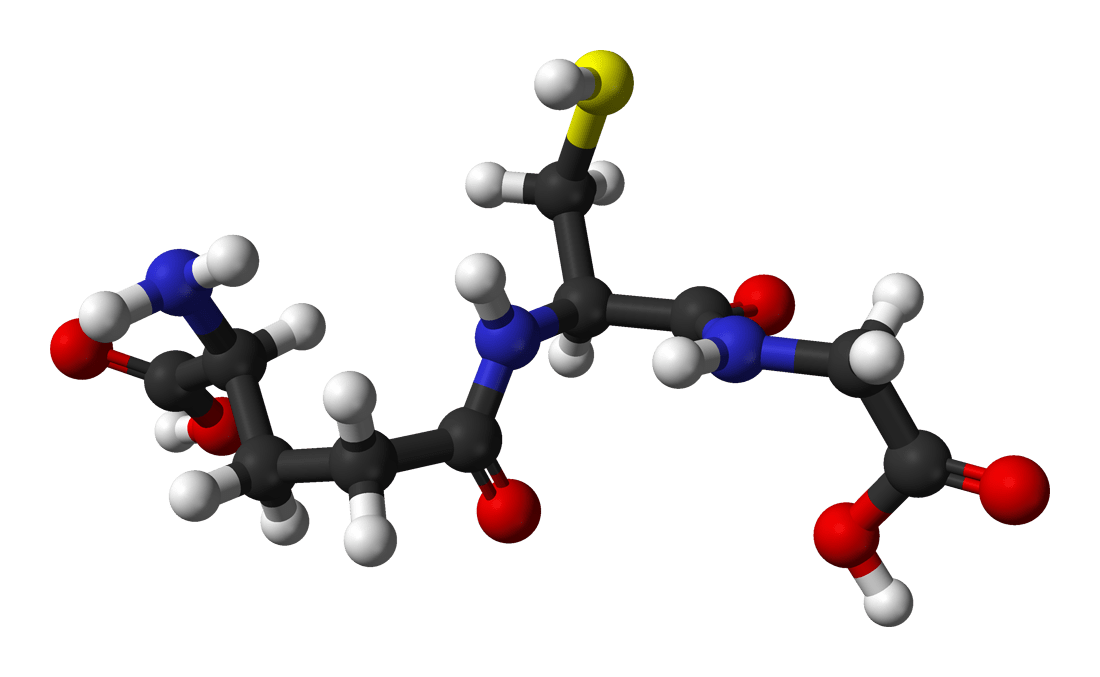 Glutathione (GSH), the prominent non-protein intracellular thiol compound, is a tripeptide made from the amino acids glycine, cysteine, and glutamic acid and it is the main player in antioxidant defense against reactive oxygen species (ROS) and electrophiles. GSH (γ-glutamyl-cysteinyl-glycine) is produced in two sequential enzymatic ATP-dependent reactions which occur exclusively in cytosol. At first, the enzyme named γ-glutamylcysteine synthase (γ-GCS) also known as glutamate cysteine ligase (GCL) links cysteine and glutamate to form γ-glutamylcysteine. This step is the rate-limiting step of GSH synthesis and is regulated by cysteine availability. In the second step, glutathione synthetase (GS), covalently adds the glycine to the γ-glutamyl-cysteine to produce glutathione.

The concentration of GSH in the cytosol of cells varies from 1 to 10 mM. Although the GSH concentration in most of the cells range 1–2 mM, in hepatocytes, which export GSH, the concentration can be as high as 10 mM. Hepatocytes transport the GSH out of cells to supply plasma GSH, which is used by other cells as an important source of cysteine for GSH synthesis. The GSH concentration in the plasma is maintained at very low level due to its uptake by other cells. The GSH uptake carries on by two enzymes on the cell surfaces. In the first step, the γ-glutamyl transpeptidase catalyzes the transfer of gamma-glutamyl functional groups from GSH to the cysteinylglycine dipeptide, which is subsequently convert to cysteine and glycine by a cysteinylglycine dipeptidase. A specific amino acid transporter then, translocates the cysteine, glycine and γ-glutamyl amino acids into the cells, where, they used for GSH biosynthesis.

The antioxidant activity of GSH intermediated via thiol (-SH) of its cysteine residue upon its interaction with ROS or electrophiles and the GSH oxidized to GSSG (oxidized Glutathione), the GSSG will reduce to GSH by Glutathione reductase (GR), the activity of GR is therefore very important to keep the antioxidant power of mammalian cells, while GSH/GSSG ratio is an indicator for redox balance in the cell.

Glutathione plays a critical role in extracellular fluid against HOCl which has been well studied and proved in cystic fibrosis patients (they are secreting lower GSH). Apart from that, Glutathione plays major roles in different cellular compartments. Mitochondria is one of the important cellular organelles which GSH involved in its function, whereby, it plays a key role in regulating apoptosis versus necrosis. In the nucleus however, GSH is a key regulator of cellular division or mitosis. 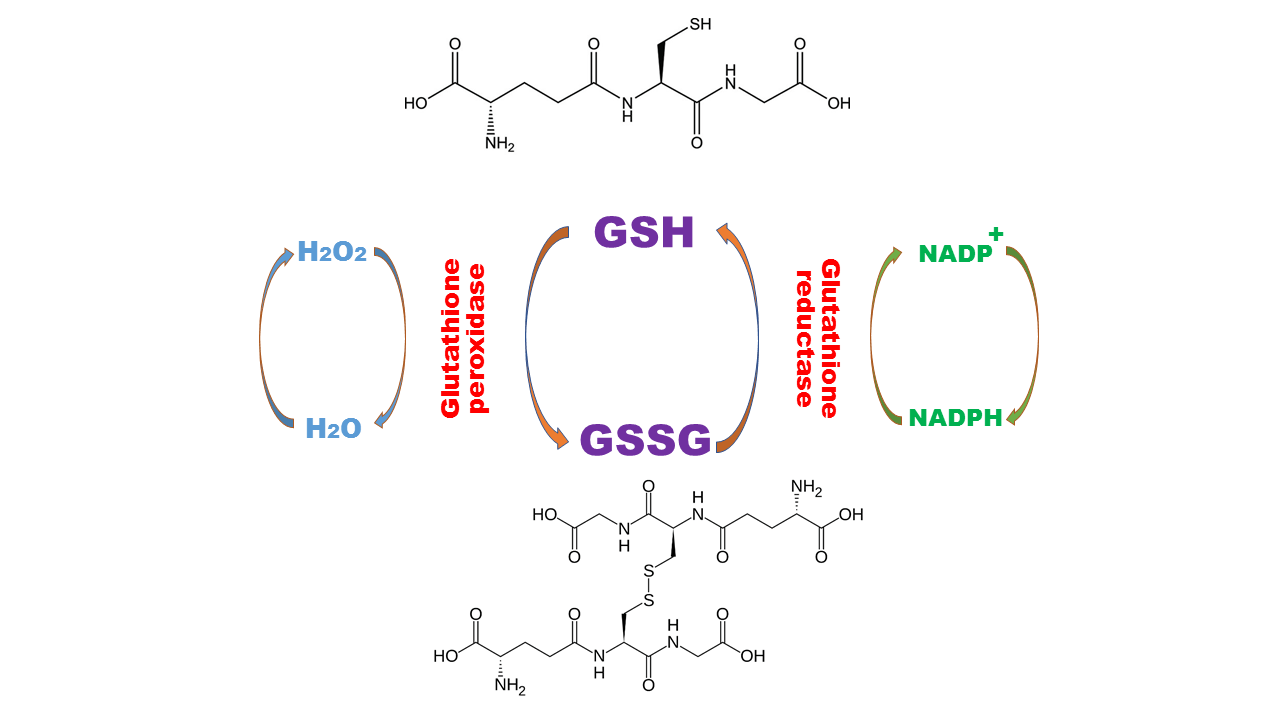 Measuring different form of thiols is one of the most widely used method to determine the level of oxidative stress and redox signaling. The reduced GSH and the oxidized one (GSSG) are the most prominent types of thiol which are widely used as indicators for evaluating the oxidative stress level.

GSH reacts with dithionitrobenzoic acid (DTNB) and produce GS-TNB and TNB anion that can be detected either fluorometric or colorimetric, the rate of TNB production is proportional to the amount of GSH. Reduction of GSSG to GSH by Glutathione reductase allows to determine the total GSH content (free GSH + GSSG); Thus, DNTB method grants measurement of free GSH, oxidized GSH (GSSG) and total content of GSH (free GSH + GSSG) in a multi-step approach in biological samples. 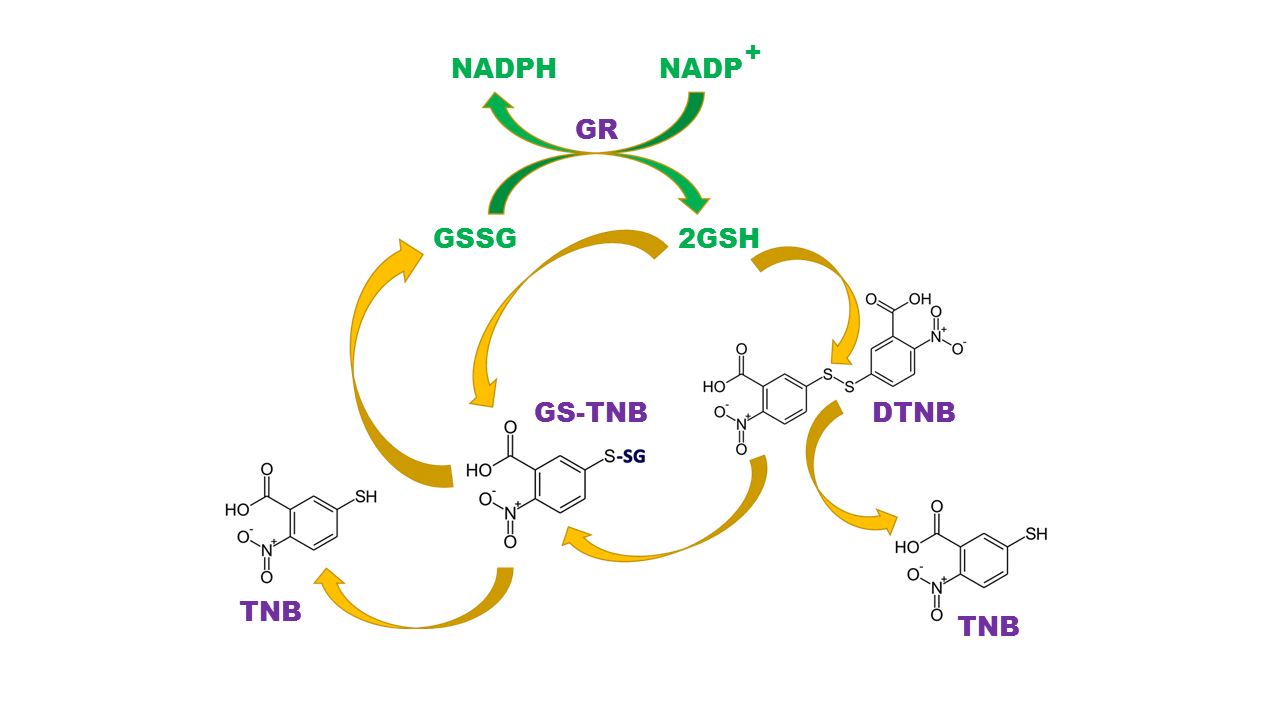 In the first step, adding the DTNB and fluorescent or colorimetric substrate measures the free GSH in the samples. In the second step adding NADPH and glutathione reductase results in conversion of all GSSG to GSH which reacts subsequently with DTNB and fluorescent or colorimetric substrate to be quantified. The final measurement at the end of this step reflects the total content of GSH (free GSH + GSSG) in the samples, to calculate the GSSG content, the free GSH content must be subtracted from the total GSH content.

Another method to measure GSSG separately, is to remove the free GSH from DTNB reaction process by modification of free GSH with N-ethylmaleimide (NEM) or vinylpyridine prior to conducting assay. This is a reversible modification and adding sodium borohydride (NaBH4) results in the GSH release, which can subsequently react with DTNB and be measured.

Glutathione (GSH) is a cofactor for the enzyme glutathione peroxidase and also involves in leukotriene synthesis. Additionally, it plays a role in the hepatic biotransformation and detoxification process; as a hydrophilic molecule, GSH is added to other lipophilic toxins or wastes prior to entering biliary excretion. In particular, GSH participates in the process of methylglyoxal (a toxic by-product of metabolism) detoxification, a two-step enzymatic process mediated by glyoxalase enzymes. Primarily, glyoxalase I converts methylglyoxal and reduced glutathione to S-D-Lactoyl-glutathione. Subsequently, Glyoxalase II converts S-D-Lactoyl-glutathione to Reduced Glutathione and D-lactate.

Glutathione S-transferases (GSTs) are the enzymes expressed in the cytosol, microsomes, and mitochondria and catalyze glutathione conjugation to electrophilic compounds, not only produced from exogenous xenobiotics by biotransformation but also arise from endogenous substances.

Last but not least, GSH participates in non-enzymatic conjugation with some chemicals, for instance, it is hypothesized that glutathione reacts with n-acetyl-p-benzoquinone imine (NAPQI) -the cytochrome P450 reactive metabolite formed by toxic overdose of acetaminophen- to detoxify it.