Estrogens are the main female sexual hormones and the key players in menstruation. Although estrogens are made from cholesterol mostly in ovaries, they are not exclusive to women and menstruation; as men, trans-women, children, and post-menopausal women can also produce estrogens. However, due to the lack of ovaries in these groups, they produce estrogens in other organs such as fat tissues, bones, skin, liver, adrenal gland and testis.

In addition to their critical role in menstrual cycle and the development of secondary sex characteristics (breast development, pubic hair growth), estrogens are also involved in many other functions such as bone health, cognitive function, and etc.

Estrone (C18H22O2), also known as E1 or osterone (3-hydroxy-1,3,5(10)-estratrien-17-one) is a C-18 steroid hormone. It is one of the three naturally occurring Estrogens in woman (weaker Estrogen), the two others are Estradiol and Estriol. As an Estrogen, Estrone is involved in female sexual development and function, and is one of the major hormones found in women bodies after menopausal. 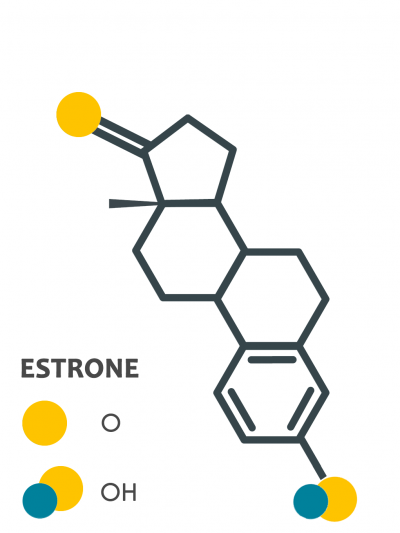 Estradiol (C18H24O2), also known as E2, is a major female sex hormone and the most prominent estrogen in the body (strongest estrogen) which regulates menstrual reproductive cycles as well as the estrous cycle. It is a key regulator of growth, differentiation, and function in a wide array of tissues, including the male and female reproductive tracts, mammary gland, brain, skeletal and cardiovascular systems. 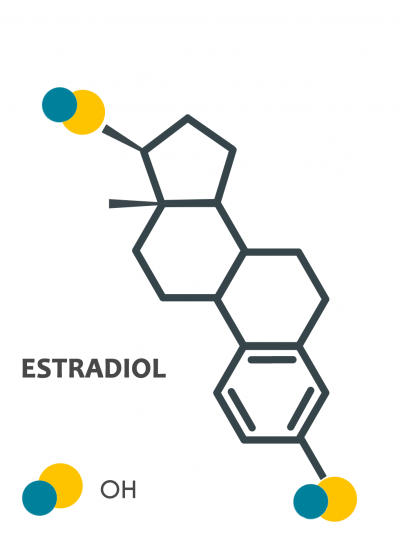 Estriol (C18H24O3), also known as E3 or oestriol, is a C-18 steroid hormone involved in female sexual development and function. It is one of the three endogenous Estrogens in woman, the two others are Estradiol and Estrone. Being important for the health of the mother and baby, Estriol constitutes 60-70% of the total Estrogens during pregnancy. It is mainly produced by placenta in pregnant women, increasing to 300-500-fold higher than in non-pregnant women. 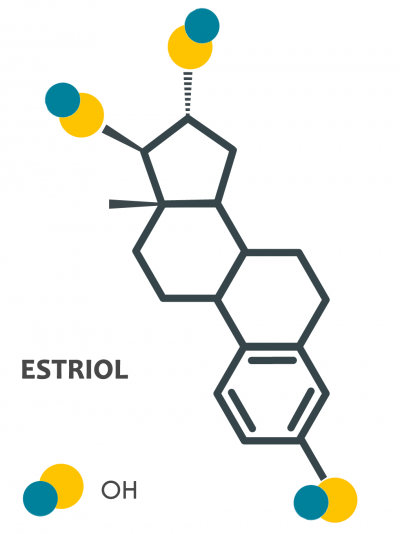 Estetrol (C18H24O4), also known as E4 or oestetrol, is a C-18 steroid hormone which is only produced by the fetal liver during pregnancy with longer half-life in body (20-28 hours) that makes it an attractive candidate to be used as a medication. 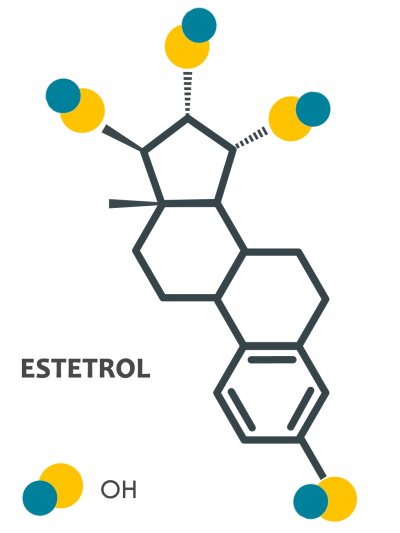 At the beginning of the cycle (follicular phase), or from the start of the period until ovulation—estradiol level goes up to stimulate the growth and thickening of the endometrium (the lining of the uterus).

Almost at the end of the first phase, estradiol level is on the peak. This triggers ovulation by stimulating the brain to release two important hormones: luteinizing hormone (LH), and follicle stimulating hormone (FSH). Just before ovulation, the follicle stops producing estradiol, causing a reduction in its level.

In the second part of the cycle (luteal phase), when ovulation has occurred (the follicle has burst and the egg has released); corpus luteum (a mass of cells that forms in an ovary and is responsible for the production of the hormone progesterone during early pregnancy) generates a high amount of progesterone, and also some estradiol.

If the fertilization and implantation do not happen, till four days before the start of the period, the corpus luteum stops producing progesterone and estradiol, and the levels of both hormones in blood falls down again. This start a new period.

Estrogen can be found either as a free hormone or as protein-bounded (in conjugation with sex hormone-binding globulin (SHBG) or albumin) in circulation. Free estrogen can diffuse into cells without regulation. Binding of estrogen to either alpha-estrogen receptor (ERα) or beta-estrogen receptor (ERβ) initiates the cellular physiological response to estrogen. The activated estrogen receptor induces the transcription of DNA through binding to nucleotide sequences known as estrogen response elements (ERE) leading to a physiological response. Hypothalamus and pituitary gland regulate the estrogen hormone levels in the body via a negative feedback loop.

The estrogen hormone affects different organs in the body

Estrogen stimulates the proliferation of endometrial cells in the follicular phase of the menstrual cycle, and increases the endometrial lining thickness to prepare it for pregnancy.

Estrogen enhances the proliferation of epithelial mucosa cells of the vagina and the vulva. Therefore, the vaginal and vulvar mucosal epithelium, in the absence of estrogen, becomes thin and show symptoms of vulvovaginal atrophy.

Ethinyl estradiol, (an ingredient of OCPs), prevents ovulation during the menstrual cycle by suppressing the release of gonadotropin-releasing hormone (GnRH) from hypothalamus, and the release of FSH and LH from pituitary.

Estrogen helps the development of long bones and fusion of the epiphyseal growth plates, during the age of maturity. In estrogen-deficient and postmenopausal women, it also protects bones by inactivating osteoclast activity, and preventing osteoporosis.