Catalase (EC 1.11.1.6), is a ubiquitous antioxidant, heme-containing peroxisomal homo-tetrameric enzyme that has a detoxification role by catalyzing the decomposition of the toxic cellular by-product hydrogen peroxide (H2O2) to water and oxygen. Hydrogen peroxide is formed in eukaryotic cells as a by-product of various oxidase and superoxide dismutase reactions. Hydrogen peroxide is metabolized by Catalase and also Glutathione peroxidase. Hydrogen peroxide is highly deleterious to cells, and its accumulation causes oxidation of cellular components such as DNA, proteins, and lipids leading to mutagenesis and cell death. Therefore removal of the hydrogen peroxide from cells by Catalase provides protection against oxidative damage. The highest levels of Catalase in humans are found in the liver, kidney and erythrocytes. Defects in the Catalase gene are the cause of acatalasia (ACATLAS); also known as an atalasemia. This disease is characterized by the absence of Catalase activity in red blood cells and is often associated with ulcerating oral lesions.
The ZellX® Catalase Activity assay is designed to quantitatively measure catalase activity in a variety of samples. The horseradish peroxidase (HRP), provided in the kit, uses H2O2 to oxidize a non‐fluorescent substrate into a fluorescent product, which can be measured at 590 nm with the excitation at 570 nm. Increasing levels of Catalase in the samples causes a decrease in H2O2 concentration and a reduction in the fluorescent product. A Bovine Catalase Standard is provided to create a standard curve for the assay, and the results are expressed in terms of units of activity per mL (U/mL). 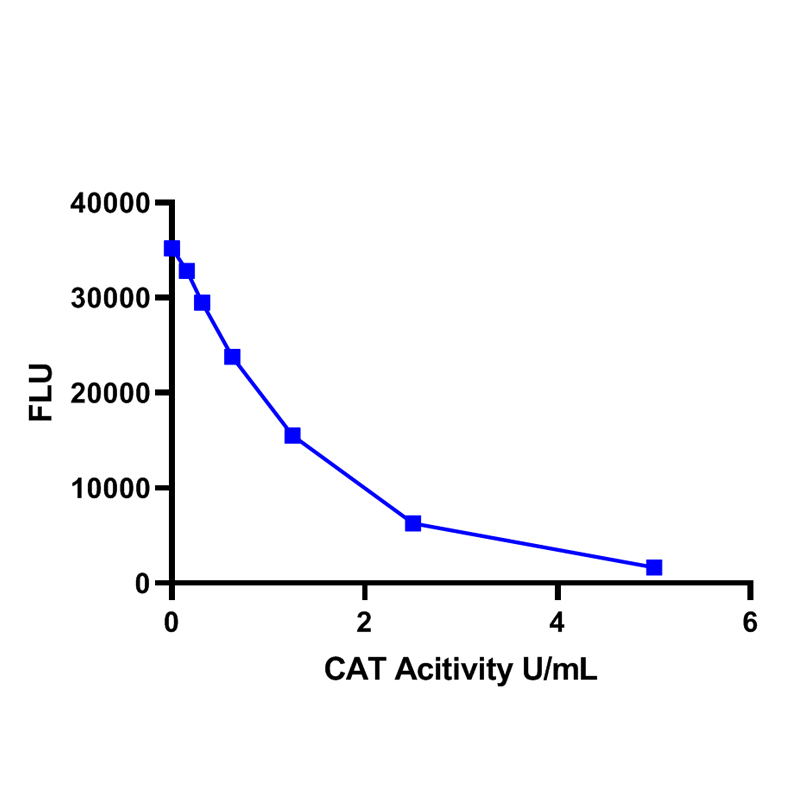